Kraków is located in the southern Poland, in the region of Małopolska, about 300km south of Warsaw. Kraków is easily accessible by air and land transport.

Kraków is very well connected through the road network. It is accessible via the A4 motorway (from east and west) and no. 7 national road (from north and south). It is connected through international bus routes with all major destinations in Europe. Kraków is also easily accessible by train, directly from Vienna, Prague and Budapest and from Berlin via Warsaw.

Flying is the easiest way to get to Krakow from all the European major cities. The Kraków John Paul II International Airport is connected with major European hubs – Frankfurt and Munich (several connections a day), as well as with London, Zurich, Warsaw and Vienna. It is also a destination of many low-cost airlines. The airport is located about 20 km outside of the city centre, with easy bus, train and taxi access to the centre.

To go to the city centre from the airport:

Please check the nearest bus stop to your chosen accommodation.

You may like to use www.jakdojade.pl app to navigate around Krakow.

The conference will take place in the buildings of Auditorium Maximum (plenary sessions) and Collegium Paderevianum (working groups). The buildings are next to one another in the very city centre of the city. 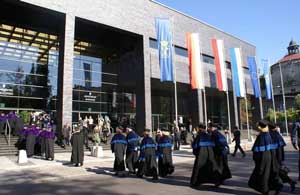